In 1919-20, several referendums are held to adjust Germany’s borders democratically. One of these referendums results in current South Jutland becoming part of Denmark. The vote in Schleswig is one of a total of six held in Europe after World War I. The referendums are based on the principle of national self-determination. The Danish-German border from 1920, together with Austria’s borders with Slovenia and Hungary, is the only one that has survived to this day. 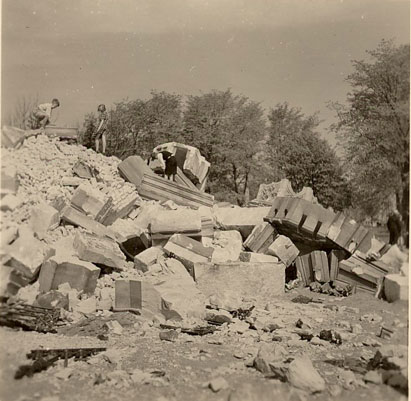 The German victory monument is blasted

However, only the tower itself is damaged, as the large bronze statue of Chancellor Bismarck for fear of vandalism had already in 1919 been removed and transported to Aschberg in South Schleswig, where it still stands. The police investigation, which is not very effective, does not reveal the perpetrators, who are presumably connected to the Danish resistance movement. 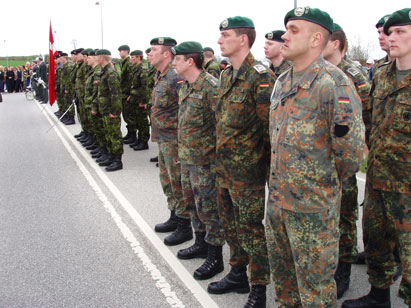 Danish and German ceremonies in Dybbøl

Until 2001, every year on 18 April, a Danish as well as a German ceremony is held at the Dybbøl Banke. The Danish ceremony is at 10 am with the German one in the afternoon. In 2002, a company of unarmed German soldiers representing the German Bundeswehr participates in the ceremony at Dybbøl Banke. However, they do not participate in the following parade in Sønderborg. The Danish celebration continues like this until 2010 where one of the main speakers is the German ambassador to Denmark, delivering a very personal speech based on his Holstein background.

From 2010, the ceremony is both a German and a Danish matter. Both countries’ armies participate in an equal manner – with weapons and flags – in the ceremony as well as in the parade. The Schleswig Music Corps leads the parade followed by a Danish flag command, an armed Danish command, a German flag command and an armed German command.