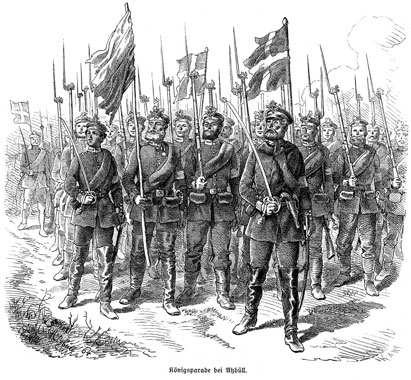 After receiving the pleasant news of the conquest of Dybbøl, the Prussian King Wilhelm travels to Schleswig arriving 21 April. On the same day, Prussian troops hold a victory parade in honour of the Prussian King in the fields between Gråsten and Adsbøl. Nearly 20,000 men marches past King Wilhelm in their uniforms from the battle, with captured flags and oak leaves on the field caps as a sign of victory. 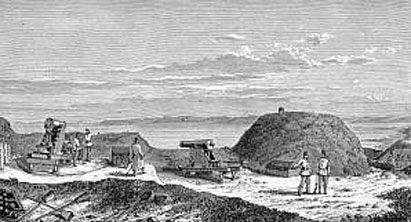 The Danes give up the Fredericia fortress

After the defeat at Dybbøl, the Danish Minister of War Lundbye to everyone’s surprise orders withdrawal of the troops from the much stronger Fredericia fortress – a real, permanent fortress and not a reinforced one like Dybbøl.

With this decision, Minister of War Lundbye wants to strengthen the defence of Als and Northern Jutland. The order is quickly executed on the night of 28 and 29 April, whereby the Danes have now lost their last flank position in Jutland. The Danish army has thus, apart from the 4th division in North Jutland, lost its offensive opportunities and is forced to concentrate on a passive defence of the islands Als and Funen.

The Prussian-Austrian army is no longer forced to keep strong combat forces at Dybbøl and Fredericia but can choose to concentrate its forces. The Danish army, on the other hand, is forced to split its already modest forces into three – on Als, on Funen and in North Jutland. 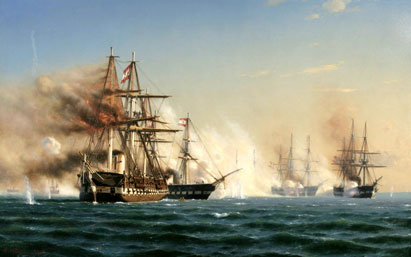 The Danish fleet has so far been totally dominant and thus able to block the German ports. But after months of preparation, the Austrian fleet from bases in the Adriatic is finally on its way through the English Channel. The Austrian navy is numerically superior to the Danish, so now the Danish dominance at sea is seriously threatened.

The Danes have regularly received reports of the Austrian fleet’s sailing from the Adriatic to the Channel. One is therefore prepared for the imminent arrival of the Austrians.

The Austrian squadron under the command of Captain Tegetthoff has orders to attack the Danish naval squadron as soon as possible. On 9 May in the morning, Tegetthoff receives a report that the Danish fleet is in the waters off the island of Helgoland. He therefore immediately returns to the sea to meet the Danes.

At 10 am the Danes initially see the smoke from the British warship “Aurora” defending British territorial waters around Helgoland as this has been British since 1814. Shortly after that, the smoke is also seen from the Austrian ships (two Austrian frigates and three Prussian gunboats), and the course is set directly against these. The Austrian squadron has also seen the Danes, and now the two squadrons are sailing at full steam against each other.

At 13:45, the Austrians open fire at about four km distance. In the following hours, the two squadrons are facing each other, fighting fiercely from both sides. Gradually, the Danish fire makes its impact, as the Danes manage to concentrate the firing on the Austrian command ship “Schwarzenberg”. Towards 4 o’clock, “Schwarzenberg” with a burning foremast must withdraw from the battle and set course for Helgoland to bring the ship into neutral territory. The other Austrian frigate “Radetzky” intervenes skillfully, and well helped by rudder damage on the fastest Danish frigate “Jylland”, manages to save all the ships into neutral waters.

The Danish squadron is now called back to Norway, after which it goes to Copenhagen as a ceasefire takes effect. Sheltered by the darkness and with extinguished lanterns the Austro-Prussian squadron sails to Cuxhaven, where the damages from the battle can be repaired.

On English initiative, on 25 April, negotiations will begin in London (called the London Conference) with the parties involved. Initially, a ceasefire will be agreed, which will take effect on 12 May.

At the conference, various divisions of Schleswig are discussed as well as a solution by referendum or arbitration – that is, a third party draws a boundary.

On the map, you can see the various border and mediation proposals that had been on the table during the London Conference as well as the final demarcation at the river Kongeåen.

The negotiations in London finally collapse on 20 June, as the Danes will not accept an arbitration. They stick to a border at the Dannevirke.