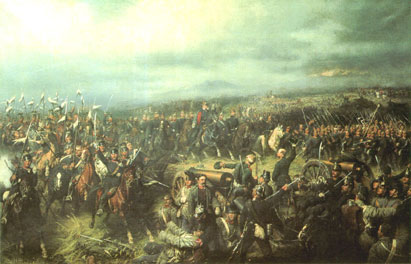 In 1865, Prussia and Austria agree to divide Schleswig-Holstein, so Austria rules in Holstein and Prussia in Schleswig. Lauenburg will be incorporated into Prussia on the same occasion. In 1866, the power struggle within the German Confederation between the two former allies develops into a regular war. Denmark is proposed an alliance by Austria as well as Prussia as both parties offer Denmark a border revision. However, the negotiations do not lead to a result. The defeats at Ollnütz (Olonence) and Königgrätz (Sadowa) force Austria to ask for a ceasefire after only six weeks of fighting.

As a result of the subsequent peace negotiations in Prague, Schleswig and Holstein, as well as a number of other German states, are incorporated into the Kingdom of Prussia. However, with the intervention of the French Emperor, the so-called Article 5 is inserted in the peace treaty, which allows the North Schleswig population to vote at a later date on its constitutional affiliation (that is whether North Schleswig should be Danish or German). The German Confederation is dissolved, and in 1867 the North German Confederation is established on Prussian initiative, which is totally dominated by Prussia. Prussia’s position among the German states is now significantly strengthened. 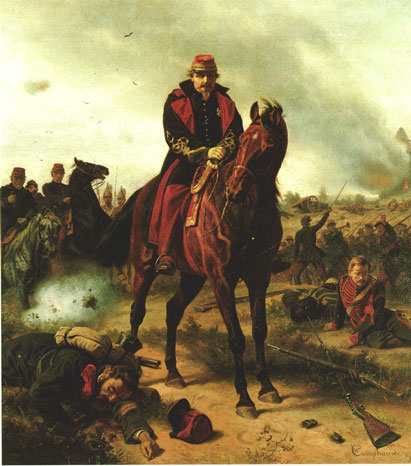 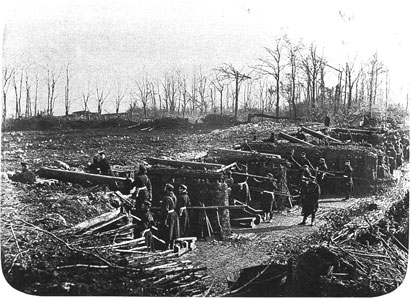 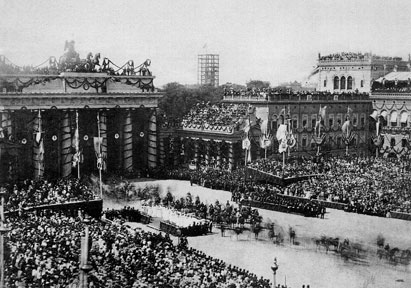 The German empire is formed

France increasingly feels threatened by the new, strong Prussia, and fears the formation of a Greater German Empire under Prussian rule. In the summer of 1870, France finds its honour offended in the question of succession to the throne of Spain. France feels compelled to declare war on Prussia on 19 July 1870, even though the French defence is very poorly prepared and the Prussian correspondingly well prepared. The French people have been given the impression that the French military has been modernized and will be able to handle any conceivable opponent. The plans are just far from being implemented, which Prussia is well aware of.

As expected by the Prussian Chancellor Bismarck, the French declaration of war leads all German states to join Prussia. The German mobilization is very well planned and is being carried out at an unprecedented pace. In just two weeks, through the skilful use of the well-developed railway network, a modern, well-organized and well-trained army of 384,000 men is brought to the French border. On the French side, only an army of 244,000 men is assembled.

The Prussian fortress at Sønderborg is declared a state of siege and the force is increased to 4,000 men.

There are now alarming reports of major German victories in northern France. The Danish interest in participating in the war is cooling, and the idea comes to nothing. On 1 September, a French army suffers a major defeat at Sedan, where the French Emperor Napoleon III is even captured! The defeat triggers a revolution in Paris, and the Empress flees to England.

After the victory at Sedan, the Germans concentrate on besieging Metz and Paris. Metz capitulates at the end of October, after which the Germans take a more offensive stance against the remaining French armies. Paris surrenders on 27 January 1871, and the war effectively ends on 28 February 1871. On 10 May 1871, the Treaty of Peace is signed in Frankfurt am Main.

The war against France lead to the desired unification of the northern and southern German states. On 18 January 1871, the German Princes proclaim the Prussian King Emperor, this takes place in the Mirror Room of the Palace of Versailles (just outside Paris). The new German Empire is thus founded, and Berlin is the capital of the new Germany.

Danish participation in a new war?

A French envoy arrives in Copenhagen on 1 August to discuss a possible Danish military participation in the war. At the same time, a French fleet of eight armoured frigates anchors south of Skagen as a prelude to a landing of a French expeditionary corps and a blockade of the German Baltic Sea ports.

The Danish popular mood demands participation in the war! The negotiations result in a proposal for the Danish involvement, provided that a strong French fleet secures the Danish waters and that a French landing force of 40,000 men is brought to the Baltic Sea. The French force, in association with a Danish corps of 20,000 men, will attack Prussia from the north through Schleswig. 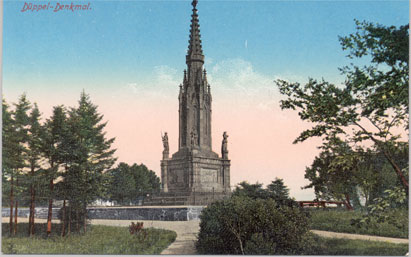 On 30 September 1872, a German victory monument at Dybbøl (Düppel Denkmahl) is unveiled at the same time as a correspondingly smaller one at Arnkil on Als. The German victories in the war against Denmark must be marked since the victory over Denmark in 1864 is regarded as the first important step towards the formation of the new German empire. Dybbøl is a name that all Germans must know.

The monument at Dybbøl is 22 m high (according to a later measurement 24 m) and built over the foundation of the blockhouse in the original Danish redoubt 4. With its impressive size and neo-Gothic, it is meant to emphasize the greatness of the new Germany.

Above the plinth of the monument, three reliefs are showing:

On the last side it says:

“To commemorate the event and those who fell victoriously when the Dybbøl Banke was stormed on 18 April 1864”.

On 18 April 1914, the German part of the local population celebrates the 50th anniversary of the victory at Dybbøl with a large procession from Ringridderpladsen in Sønderborg and up to the German victory monument at the Dybbøl Banke, where there are celebrations and wreath-laying at the German mass graves.

The big anniversary party is held 29-30 June, the 50th anniversary of the conquest of Als. Here some 2,000 German war veterans from all over Germany and Austria participate, and there are speeches by among others the German Emperor’s brother, Prince Heinrich. A telegram announcing the assassination of the Austrian Crown Prince in Sarajevo forces Prince Heinrich to interrupt the visit and hurry home. The assassination heralds the coming of the First World War, and the celebration thus is the German Emperor’s last manifestation in North Schleswig.