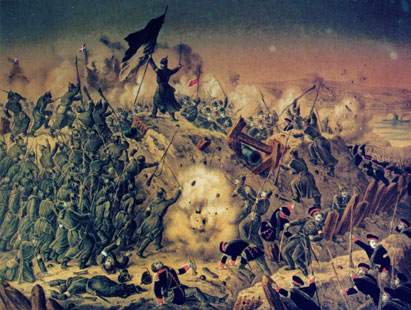 On 18 April at 4 in the morning, the most violent bombardment of Dybbøl begins with almost 8,000 grenades launched in just six hours. At 10 o’clock, the cannons stop and about 10,000 well-trained Prussian stormtroopers emerge from the last storm parallel to the Danish redoubts. The soldiers are divided into six storm columns with redoubts 1 to 6 as targets. Ten thousand men follow this, and behind them, a further almost 20,000 men are ready for the advance.

Approximately 5,000 Danish soldiers are in the front line of the redoubts and are now receiving the Prussian stormtroopers with rifle fire. In the course of 5-10 minutes, the first Danish redoubts are conquered by the Prussians, and after half an hour, seven of them have fallen. Intoxicated by the victory, many of the Prussian troops continue towards the bridgehead instead of just holding the conquered redoubts. The Prussian officers have lost control of the situation.

The Danes try to counterattack

The Danish reserve of approximately 6,000 men has not been alerted at the beginning of the assault. It is 10:30, and now orders are made to start a counterattack with the Danish 8th Brigade of about 3,000 men. The left wing of the Dybbøl position with the withdrawn line is the target. General du Plat is in doubt as to whether the attack should be carried out, but the advancing scattered Prussian units are swept aside, and the attack appears to be successful.

Shortly before the withdrawn line and at the Dybbøl Mill, the counterattack stops. In the meantime, the Prussian officers manages to organize the defence of the conquered redoubts and the withdrawn line, which is now used by the Prussians to stop the Danes’ attack. The losses of the brigade are so significant that many gaps have arisen in its line. Among other things, a dangerously large gap has appeared between the brigade’s two regiments just south of the Dybbøl Mill.

It is at this very moment – it is 11:15 – that the Prussian reserves arrive. Parts of the Prussian reserves protrude precisely into the gap between the two Danish regiments, whereby the Danes now risk being surrounded. The brigade must therefore quickly retreat more or less orderly to the bridgehead at Alssund. The attack cost 1,399 men (dead, wounded and captured), equivalent to a loss of about 45 per cent! 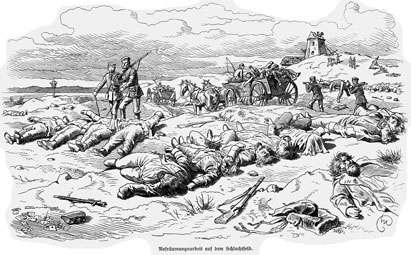 The dead are left behind

The Danes have now given up defending the Dybbøl position, and the troops are retreating to Als via two pontoon bridges, which are protected by the Brohoved redoubt. At around 2 pm the last Danish soldier leaves the Dybbøl area, and the pontoon bridges are broken off.

The losses on 18 April amounted to:

Some of the group “uninjured prisoners and deserters” may have died, as the casualty lists of the Danish units are incomplete.