Chapter 3 – The battle of Als 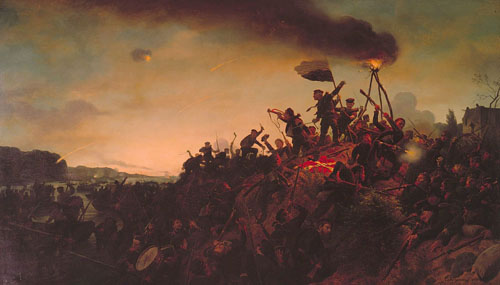 The ceasefire expires on 26 June, and immediately after 29 June at 2 o’clock (summertime at 3 o’clock) in the morning, 2,500 Prussian soldiers in 163 boats cross the water Alssund near Sottrupskov as the first wave of attack. The Danish forces on the Kær peninsula immediately take up the fight, but the defence of Als is too weak and too poorly organized.

At 2:45 the Danish armoured ship “Rolf Krake” appears and for a while stops the transfer of the Prussian forces. But at this point, there are already about 5,000 Prussian soldiers on Als, and Danish troops are under intense pressure. The captain of the armoured ship assesses that the battle is lost, after which he sails away to participate in the evacuation of the Danish forces from Als.

During the morning the Prussian troops raid the Danish defence, and at 5:30 the Danes cease to defend the island and retire during a continuous battle to the peninsula of Kegnæs. From here the troops are shipped over the next few days, and on 1 July the last Danish soldier leaves Als. The Danish army’s losses (dead, wounded and captured) in connection with the battle for Als totalled 3,148 men, while the corresponding Prussian losses amounted to 372. 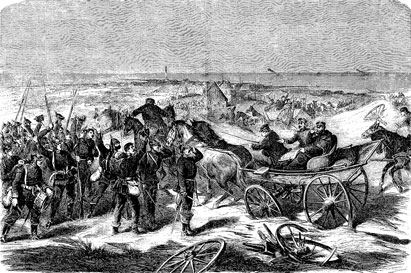 The Danish defeat is absolute

After the loss of Als, the discouragement spreads in Denmark. Prussia and Austria have now occupied all of Jutland up to Skagen, and it is feared that also Funen will be lost. Perhaps even Zealand is threatened, so the demand for peace at all costs is spreading. The Danish Government resigns, and a new one is appointed. The Government is requesting a ceasefire, which will take effect on 20 July. After this, negotiations begin in Vienna from the end of July, leading to the Treaty of Peace, which is signed on 30 October 1864.

The victors are merciless in the peace negotiations in Vienna, and Denmark must unconditionally relinquish the Duchies. The Danes cannot even get guarantees for the treatment of the Danish-minded part of the population in North Schleswig. Denmark’s defeat is total.

Denmark loses Schleswig, Holstein and Lauenburg and thus two-fifths of the country’s total size. The population is reduced from 2.6 million to 1.6 million. 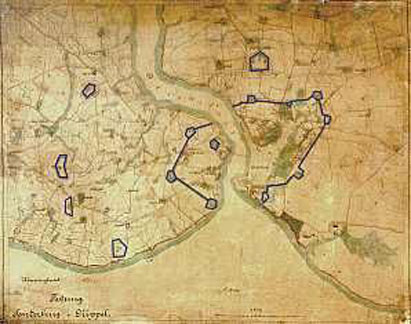 Shortly after the Danish defeat in 1864, Prussia built a new fortress on the Dybbøl Banke and around the city of Sønderborg (Festung Sonderburg-Düppel). However, the forts can also protect Schleswig from a possible Danish – perhaps French-backed – attack from the north into the lost Schleswig!

The fortress consists of:

In other words, a significantly stronger and more resilient fortress than the original Danish Dybbøl position from 1864.