At the History Centre Dybbøl Banke you step directly into the dramatic events of the war of 1864. You become part of the drama, and you learn more about one of the most important battles in Danish history.

Experience history with all your senses: When you enter the territory, you will hear how the thunder of cannons blends with the shouting and crying of injured soldiers. Go on your journey of exploration and find out how a redoubt is built. Look into the barracks in the soldiers’ town behind the front where the young and tired soldiers try to get some rest between the bloody battles.

The war of 1864 meant the disappearance of the multinational Danish state. Denmark was reduced to a small national state – however, by 1920 it got a part of Southern Jutland in the form of Schleswig back. Prussia grew into the expanding German Empire which later vanished and developed into the Federal Republic Germany we know today. It is, therefore, a very central chapter in the history of Europe that you will find here at the History Centre.

If you are ready to take in the History Centre Dybbøl Banke, we are prepared to give you quite an experience. Exciting, entertaining and deeply serious. 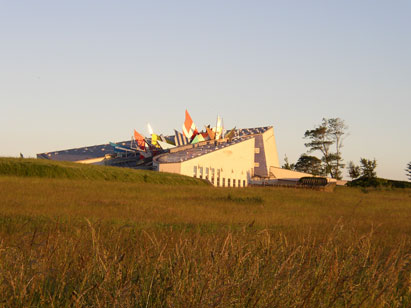 The History Centre building was created by the architects Ernst Lohse and Michael Freddie, 1st prize winners in the architectural competition (1990). The built-up area is approx. 1,000 square metres divided into two wings in a V-shape with the tip facing towards west and the country road.

Both inside and outside the building is extraordinary as it is full of symbols. The meaning of these symbols is for the visitor to decide. The building must be seen in the context of Dybbøl Mill, which stands as a round and friendly symbol of peace. The History Centre, by contrast, is a sharp and intrusive symbol of war. Its mass is skewed and sinking into the ground like the area’s blasted concrete remains of the Danish gunpowder magazines. Up from the interior of this bombed-out and torn-down redoubts, colourful symbols of weapons and banners tumble up into the sky. It is inspired by older panoply (a range of wall-mounted arms) but here placed in a chaotic and unheroic pose.

The inside is characterized by the material wealth of the 19th century and its joy of construction with bricks, brass, rough iron, concrete and surprising gold leaf plated detail. The burnt timber remains from grenade-struck Danish blockhouses and the deep, ultramarine blue night sky are in contrast – and are complemented by wrought ironwork and quirky grids, profiles and sunny yellow walls in the Dannebrog hall.

Thus, the building is quite unique and invites you to explore. Strange constructions with crooked and tipping surfaces, palisade poles that break through the walls and cornices that surprisingly emerge, give the visitors a sense of the chaos that war is.

The building contains four halls: The auditorium (with introductory film), the cinema with a movie about “Assault Day”, the exhibition hall and the diorama with a tableau from a Danish trench. 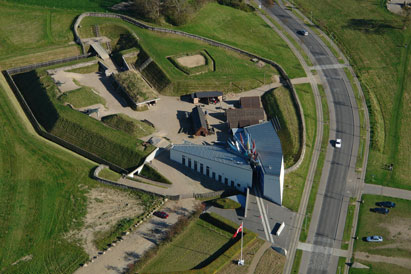 The soldiers’ town and the redout

In the immediate vicinity of the History Centre building, two situations are illustrated through reconstructions: Behind the front as a reserve and forward at the front.

Behind the front is illustrated through the soldiers’ town with the different types of barracks in the camp for the Danish reserves approx. 1 km behind the redoubt. That is the centre of the re-enactment during the high season as well as of the off-season pedagogical activities for scholars.

The front is illustrated with a large part of a Danish redoubt with rampart and trench, several cannon positions, a blockhouse (the shelter of the redoubt), two concrete gunpowder magazines and the redoubt’s entrance with a rolling bridge.