The creation of the centre

The idea of turning the Dybbøl Banke into a national park was born in 1924.

As a gift to the Danish people, most of the old Dybbøl redoubts were handed over to the state in 1924. This happened after the area was acquired through a national fundraiser. Thus, the “National Park Dybbøl Redoubts” was created and in 1936 Prime Minister Th. Stauning inaugurated several memorial stones and monuments.

The Danish redoubts were visible as markings in the grass and as ruins of blown-up concrete powder magazines and foundations for demolished blockhouses. Compared with the clear and dominant German redoubts that were built after the conquest of Dybbøl (Festung Sonderburg-Düppel 1865-85), the Danish markings were difficult for the many visitors to understand. 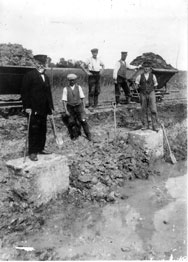 Excavation of the foundation for blockhouse in redoubt no. 2

As the development of the Dybbøl Banke took off, and new agricultural facilities would be added, the overview of the battlefield was in danger of being lost. Therefore, approx. 250 hectares were subject to conservation successively through the 1920s and 1930s. 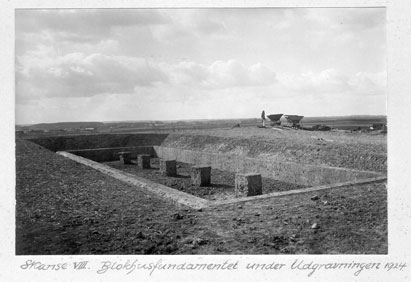 Excavation of the foundation for blockhouse in redoubt no. 8

In 1974, a new conservation case was raised, which in addition to the already protected area covered approximately 820 hectares. It was later stated, “that there was a need for protection that goes beyond what is usual in other protected areas. It is essential not only to preserve the landscape in its present state but also to seek a recreation of the terrain of the historic battlefield as it was in 1864” (The Preservation Board of the Ministry of Environment). Not only was it to be preserved, but changed to explain better, as was shown in the final order of conservation of 23 November 1987. Agricultural properties and buildings were bought when the opportunity arose, and significant improvements to public transport in the area were created. 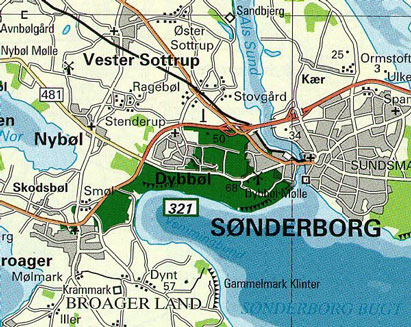 The extent of the protected landscape

THE HISTORY CENTRE COMES INTO EXISTENCE

The planning of how to create improved opportunities for the experience of the area’s history was carried out in the Dybbøl Committee with representatives of the state, the county, the municipality, the museum at Sønderborg Castle and others. Inspired by foreign visitor centres, it was decided to build information facilities at Dybbøl.

The Aage V. Jensen Foundations pledged to fund both the architectural competition and the centre. The construction and the appliance were made possible through a donation of almost 23 million DKK (3 million EUR). The Dybbøl Banke Foundation, whose born Chairman was the Mayor of the Southern Jutland County, was to be responsible for construction and operation. The interior design and content were created according to guidelines set out by the Dybbøl Committee, except for a new element: the design of open-air space for direct experience activities with selected topics. 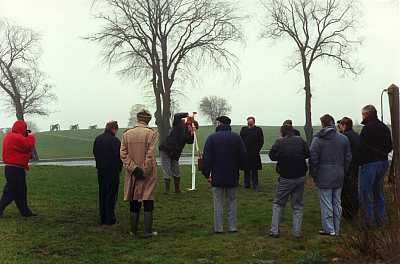 The Conservation Board approved the proposal for a building as being in keeping with the purpose of the conservation. However, the chosen building – the 1st prize winner in an architectural competition with almost 200 proposals – was quite unconventional and loaded with symbols. Former County Mayor Chresten Philipsen broke the ground to the History Centre Dybbøl Banke on 2 April 1991.

DEVELOPMENT OF THE HISTORY CENTRE 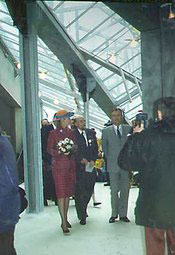 Her Majesty Queen Margrethe II inaugurates the History Centre on 18 April 1992. To her right the Centre Manager Hans-Ole Hansen and HRH Prince Henrik.

The main task of the History Centre Dybbøl Banke was to help visitors understand the weak traces of the Danish redoubts as well as to provide insight into the cultural environment and the heritage of the Dybbøl landscape and its content of various national historical symbols.

In principle, a visitor centre is a once and for all established communication facility that is not subsequently changed or further developed. However, the Dybbøl Banke’s significance nationally, as a symbol-laden place for Danes and Germans, and as a place for reflection on war and peace on a historic battlefield, is a story that involves a dynamic over time that is contrary to the visitor centre principle.

With the modern means of information and in harmony with current experience-oriented dissemination, a desire arose to strengthen the Dybbøl narrative. This coincided with a national desire for the dissemination of knowledge significantly beyond a traditional visitors centre, and for which one was also prepared to pay. An unprecedented degree of enlightenment thus arose at the Dybbøl Banke only a few years after the inauguration in 1992.

In 1994, the Centre Management and the Foundation Advisor H.H. Holden Jensen presented a plan for a reconstructed redoubt system immediately adjacent to the History Centre’s east facade, which would be a significant extension of the outdoor activity yard.

The intention was to provide the audience with a better understanding of the remains of the ten Danish 1864 redoubts and their original design. In particular, visitors to the Dybbøl terrain could distinguish the Danish facilities from the German 1865 facilities. This is especially true of Kongeskansen (The King’s Redoubt), which has often been interpreted as a Danish redoubt and not a German one from 1865, as it actually is. Furthermore, the facility was to illustrate the historical conditions at the front and at rest for the Danish soldiers in the 1864 war.

In the following years, the original plan was expanded to include an underground facility that would house the story “The time that followed” about the history of Schleswig 1864-1920, including the role of the southern Jutlanders in the First World War.

In 1999, the Dybbøl Banke Foundation was able to adapt the sketch proposal for “The Reinforced Dybbøl Narrative” on the condition that the funds for the construction works could be provided as a donation from private sources. The project, which was divided into three construction phases, would cost around 40 million DKK (5.3 million EUR). The county and the municipality were benevolent with regard to paying the VAT on the construction sum.

A fierce public debate broke out in the year 2000 as the size and content of the project became more widely known. The debate positively influenced the sketch plans and the loose thoughts that the Centre Management had made about the future. Critics – especially historians in Southern Jutland – felt that they had not been consulted. Centre Manager Hans-Ole Hansen felt that too few entered into an understanding dialogue.

On 6 March 2001, the Sønderborg City Council adopted a local plan for the 1st construction phase, the construction of parts of a Danish redoubt. This was done based on the Conservation Board’s approval in principle, and that the Dybbøl Banke Foundation had decided to suspend phases 2 and 3 for the time being. 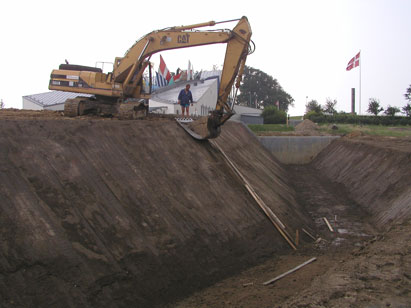 The rampart is excavated

On 18 April 2003, the first part of the redoubt – rampart, moat with stockade and the first reconstructed field cannon – was inaugurated.

The second part – blockhouse, rolling bridge, several cannons, two gunpowder magazines and the barracks camp in the soldiers’ town – was completed in 2005-07. 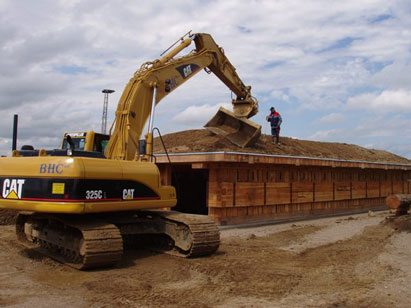 The new blockhouse is covered with earth 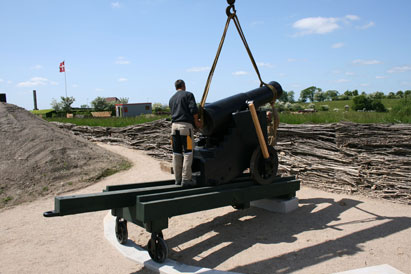 The expansion of the History Centre Dybbøl Banke in the period 2001-07 has ensured that the task – in the extremely important social field of conflict and peace seen in the Schleswig border region and understood from the region’s past – has been given the necessary physical framework. The background to the 1864 war and its consequences up to the present is conveyed here in a popular-historical and professionally responsible manner. 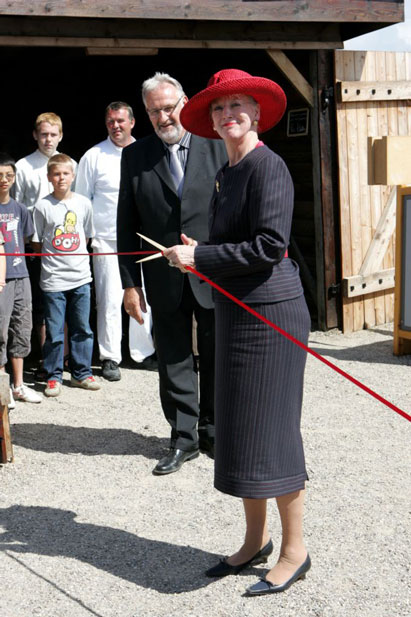 On 17 July 2007, Her Majesty Queen Margrethe II inaugurated the new facility with redoubts and the soldiers’ town. The facility cost 16.5 million DKK (2.2 million EUR) and has been generously supported by:

The History Centre is visited annually by about 50,000 guests, and there are more than 200,000 visitors to the website 1864.dk. The History Centre is acknowledged as one of currently 14 science educational activity centres supported by the Danish Ministry of Education with funding to develop the dissemination.

The History Centre Dybbøl Banke is not a museum, but a “storytelling house” primarily working for its own income.

Since 2005, the History Centre has also been responsible for the daily operation of the Dybbøl Mill.

The History Centre is owned by the Dybbøl Banke Foundation, which has been responsible for the construction of the redoubts and handles the scientific, educational activities.