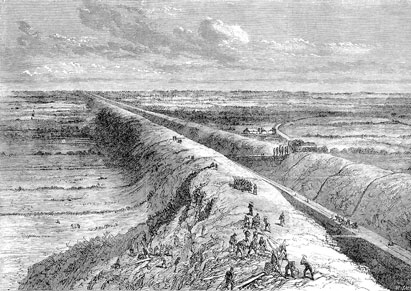 The image from a contemporary English newspaper shows an almost invincible rampart with microscopic soldiers completing the last few details. Such an unrealistic belief in the great strength of the Danish defence system was widespread in the Danish population and the Government in 1864. It is blindly trusted that the Danish army can stop a prominent enemy at the Dannevirke. 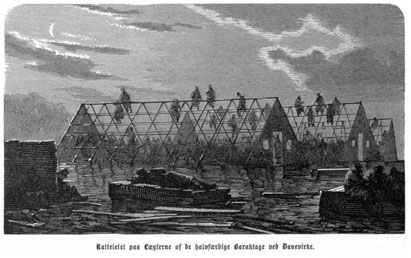 The reality was different

When the first soldiers arrive at the Dannevirke position, the barracks for their accommodation have not been built yet, connecting roads have not been constructed, and many of the obstacles in front of the position have not been established. All this the Danish soldiers must now fight with during January when the frost makes the groundwork very difficult. The position is therefore far from finished as the war breaks out. 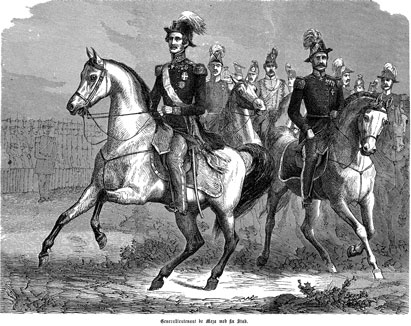 The danes give up danevirke

After the first fighting in front of the Dannevirke, it is clear to the Danish High Command that the position cannot be held. The Danish Commander-in-Chief, General Christian Julius de Meza, is, therefore, convening a War Council on the evening of 4 February. The assembled senior officers decide after five hours of intense meeting to resign the Dannevirke position. The retreat begins the following day, and in the evening the last Danish troops leave the Dannevirke. 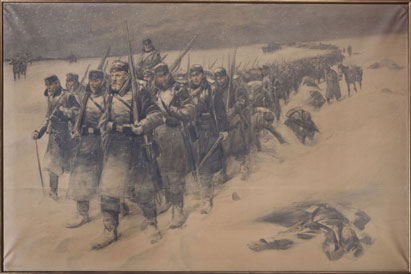 Almost 40,000 Danish soldiers, the entire Danish field artillery and the train of vehicles are returning to Flensburg under extremely difficult conditions. Fourteen hours in a row, the soldiers march in the dark of night and on icy roads with the wind and snow from the northwest in their faces and the thermometer pointing to -10°C.

Despite these extreme conditions, only ten men freeze to death during the retreat, 120 are captured and 173 deserts along the way. 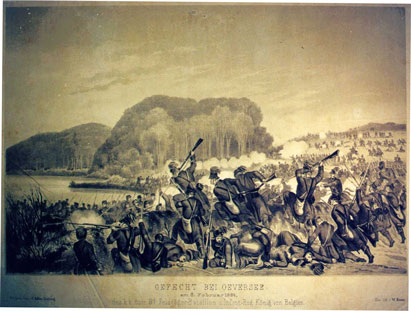 The austrians catch up with the danes

The sudden and well-executed Danish withdrawal takes the Austrian High Command with surprise as it is not notified until early in the morning of 6 February. A larger force with both artillery and cavalry is sent to frustrate the Danes as much as possible.

At Sankelmark Lake, a Danish brigade has been ordered to stop the pursuers. It now comes to a fierce battle, where the Danes slowly, under violent bayonet fighting man against man, are forced back. The Danes’ intense resistance and the relatively significant Austrian losses cause the Austrians to give up the pursuit.