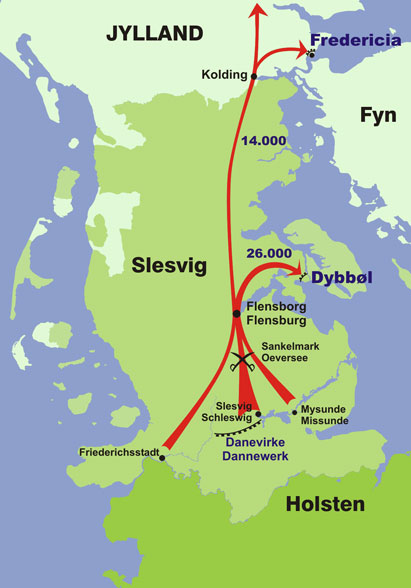 The Danish army now divides into three, of which the majority of approx. 26,000 go to Dybbøl, as the defence here has high priority. The rest go north in Jutland, where they are divided into two groups, a mobile corps (4th division) which retreats north of the river Kongeåen and a corps to defend the fortress Fredericia.

Dybbøl is politically important, as it is now the last part of the Duchy of Schleswig that Denmark holds. This is expected to be an advantage in any future negotiations on a division of Schleswig.

Dybbøl is also a threat to the Prussian-Austrian forces moving north in Jutland. From Dybbøl, their supply lines can be cut off, as the Danish fleet so far dominate the sea.

Moreover, the Prussian-Austrian forces can never know where the majority of the Danish army is located. This forces them to devote relatively large powers to the siege of the two Danish fortresses, as they must be able to stop a possible Danish attack from the strongholds. 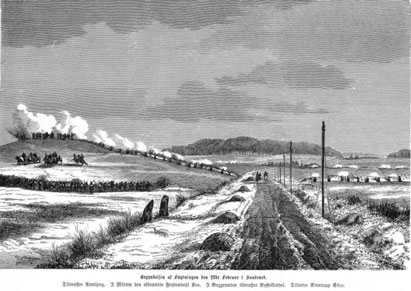 The picture shows the fight on 22 February 1864. Danish troops have taken a stand at Avnbjerg (left). Two Danish field cannons are in position on the hilltop. But this does not match reality as the field artillery was not deployed at all that day!

The first battles at Dybbøl

On 18 February, Prussian forces make a first minor attack on Dybbøl in connection with the construction of a pontoon bridge over the water Egernsund, which will enable them to occupy the entire Broagerland. The Danish armoured ship “Rolf Krake” sails into Flensburg Fjord and tries to destroy the pontoon bridge, but without success.

In the attack on the position, the Prussian forces take some Danish prisoners, partly because the Danish outpost line is poorly positioned. The Prussian forces withdraw after the attack. The attack is repeated on 22 February with even greater success. The Danes lose 382 men of which 242 are uninjured prisoners – 85 of these are probably deserters from Schleswig. In comparison, the Prussians lose only 37 men during the battle!

After this battle, the Danish outpost line will be drawn closer to the Danish redoubts, which is a better position.

On 17 March, a smaller Danish attack to the northwest develops into an actual battle, where the Prussians quickly throw in larger forces. The Danes are almost completely forced back into the redoubts with practically all the terrain in front of the position lost. The Danes lose 667 men this day against the Prussians’ 138 men. 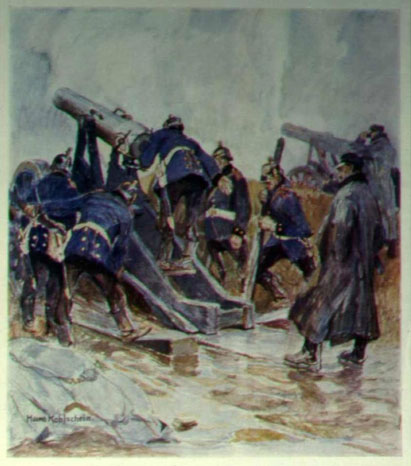 The Prussians use new, modern cannons

As the Prussian High Command has great respect for the Danes’ position at Dybbøl, it is decided to initiate an actual siege with the deployment of modern heavy siege guns. However, these must first be transported by train from Berlin to Dybbøl. From 10 March, the construction of cannon positions starts at Broagerland near Gammelmark, as cannons from here can with great effect bombard the Danes in the flank. Besides, observation posts and an artillery park are now being built behind the cannon positions.

On 15 March, the batteries really open fire against the Danish armies. The Prussian High Command expects the Danes to be expelled from the redoubts by means of these new heavy siege cannons. These are 12 and 24 pounds (12 and 15 cm) rifled rear-loading cannons with ranges of up to five km and with an unprecedented precision at the time.

After a few days of bombardment, the Prussian High Command must realize that their modern cannons alone will not be able to drive the Danes from the redoubts. They are now preparing for a prolonged siege with the construction of an actual offensive position in front of Dybbøl. The guns at Broagerland are then tasked with preventing the Danes from maintaining and strengthening the Dybbøl position. 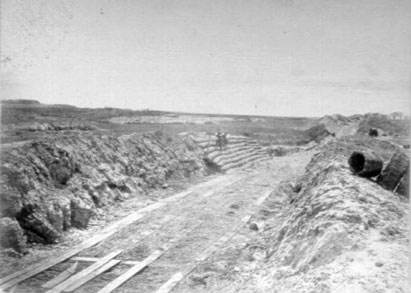 The Prussians dig themselves towards the redoubts

To make room for the first parallel in the offensive line, the Prussians attack the southern part of the redoubts on 28 March at 3 o’clock in the morning. The Danish outposts must be thrown right back to the redoubts, but the Danes are quickly alerted, and the attack is rejected. This is not least due to the rapid intervention of the armoured ship “Rolf Krake” in the battle. Therefore, the first Prussian parallel must now be built further away from the redoubts than initially planned – almost one km. The parallel is completed on 1 April and is protected by eight batteries located behind it with a total of 40 cannons.

The construction of the parallel will initially divert the Danes’ attention from a planned crossing to the island Als at Ballebro-Hardeshøj, where a ferry sails today. At 3 am on 2 April, 20,000 Prussian soldiers will sail across Als Fjord in many smaller boats and rafts. The transition is covered by a large number of heavy siege batteries built for this purpose. However, the weather is rather windy, so the operation is postponed until the next day. As the weather does not improve, the crossing is cancelled. Had this daring operation succeeded, the Danish soldiers in the Dybbøl position would have been forced to surrender, and Denmark would in one blow have lost almost half of its army!

After this, the Prussians make every effort to attack the Dybbøl position head-on. In the following two weeks, therefore, another three storm parallels will be constructed. The last parallel is completed on 17 April at a distance of about 220-300 m from the Danish redoubts. 126 Prussian cannons and mortars distributed in about 30 batteries are now participating in the destruction of the Danish redoubts. 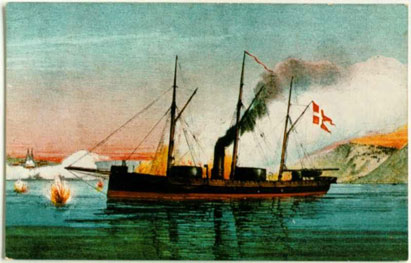 The armoured ship “Rolf Krake” is seen here on one of its trips into Vemmingbund. “Rolf Krake” is the Danish navy’s first real armoured ship. It is lined with 114 mm iron plates on the sides, and the deck has half as thick iron plates. The vessel is equipped with four 60-pound rifled, frontloaded cannons installed in two rotatable twin towers. Purchased in England in 1863, the vessel is at this time one of the world’s most modern warships.

The ship is fired upon vigorously from the Prussian cannons at Broagerland, but its greatly armoured sides can withstand even the heaviest Prussian pointed grenades. However, the ship is vulnerable to hits in the deck, which is relatively weakly armoured.

“Rolf Krake” should support the Danish left wing during the defence of the Dybbøl position. This succeeded, among other times, on 28 March 1864.