Chapter 1 – A prelude to war 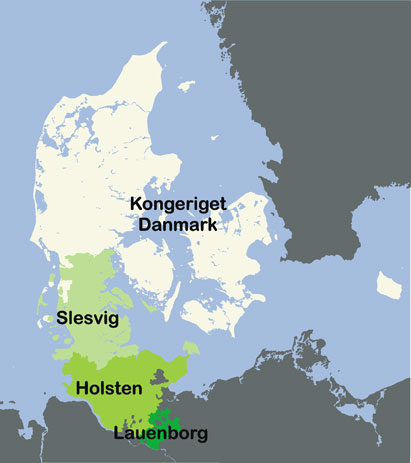 Before 1864, the Danish Monarchy consisted of three main parts: the Kingdom of Denmark itself, as well as the Duchies of Schleswig and Holstein. In addition, the economically less important parts Lauenburg (Danish from 1814 as “compensation” for the loss of Norway), Iceland, the Faroe Islands plus the colonies Greenland and the West Indies. The kingdom was known as the national state of Denmark – and was indeed a multinational state.

The national state of Denmark in the 1860 census:

With the Constitution of 1849, the Kingdom of Denmark had a free and modern charter, but this did not apply in the Duchies! Here, in fact, the Danish King was still a sovereign ruler with advisory class assemblies.

With the November Constitution in 1863, the Danish Government entered into a common constitution for the Kingdom of Denmark and the Duchy of Schleswig. However, the 1849 Constitution was not extended to Schleswig, although this had been the intention of the National Liberals since 1849. After all, the Government did not dare to take this step as long as the whole of southern Schleswig did not want to join the Kingdom. In South Schleswig, on the contrary, the people wanted Schleswig and Holstein to be admitted into the German Confederation. 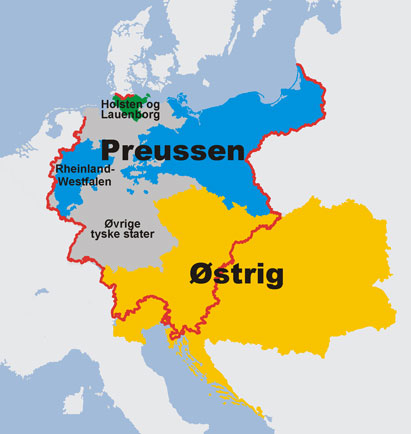 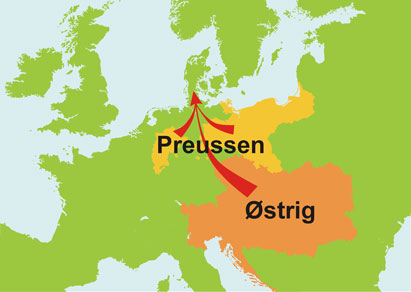 Germany was a patchwork of 35 small and large Kingdoms, Principalities and Free Cities called the German Confederation (Der Deutsche Bund).

Prussia was Austria’s biggest competitor in the Confederation, not least because of the thoroughly industrialized Ruhr area (Rhineland-Westphalia), which after the Congress of Vienna 1814-15 became part of Prussia. England had wanted a strong Prussia as a counterweight to France.

The German Confederation (Federal Council) decided on 7 December 1863, in response to the Danish Constitution of November, which was contrary to agreements concluded in London in 1851-52, to carry out an execution (enforce the will of the German Confederation) in Holstein and Lauenburg with a federal force consisting of Austrian, Prussian, Saxon and Hanoverian troops.

Christmas Eve 1863, 12,000 Saxon and Hanoverian soldiers entered Lauenburg and Holstein. The Danish troops stationed in the two Duchies retreated to Schleswig without any incidents.

On 16 January 1864, Austria and Prussia demanded that the November Constitution be withdrawn within two days – which was impossible – and then Austrian and Prussian troops also moved into Lauenburg and Holstein. On 1 February 1864, the forces continued into Schleswig. This was no longer a federal decision, so now it was an actual war against the Danish Monarchy!